There was a dramatic one-two for Korea in the Men's Individual Final at World Cup IV as 21-year-old duo Jun Woongtae and Lee Jihun claimed gold and silver respectively.

Jun (KOR), winner of World Cup II and a World Junior silver medal in 2016, timed his Laser-Run to perfection as he held his nerve on the range and left runners with tired legs behind him on the cross-country course in Drzonków.

Lee (KOR), in World Cup medal contention for the first time after a strong junior career of his own, refused to buckle under pressure from more experienced competitors and won a thrilling battle with Patrick Dogue (GER) for silver. 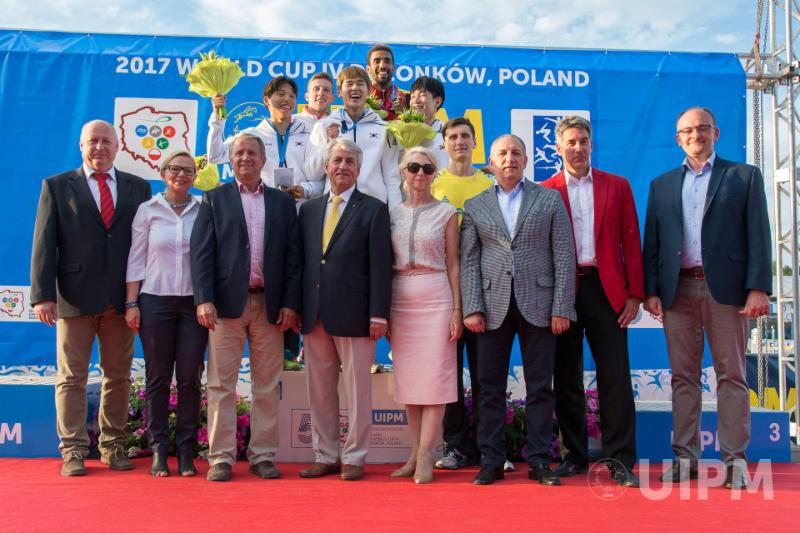 It was another glimpse of the huge potential of Korean pentathlon, where there is now genuine strength in depth. Seo Changwan (KOR) also finished in 6th place.

"In Korea the pentathlon family now has many good athletes and the future is bright."

Dogue (GER) seemed satisfied with his bronze medal, even though he had briefly overtaken Lee (KOR) on the final lap, and the quality of the three medallists' performances was underlined by the fact that Rio 2016 Olympic silver medallist Pavlo Tymoshchenko (UKR) was made to settle for 4th place.

Tymoshchenko (UKR) already had the complete set of gold, silver and bronze medals from the first three rounds of the 2017 World Cup, and will go into the World Cup Final in Vilnius (LTU) next month as the most consistent performer of the season. But today he never quite managed to seize the initiative.

The Fencing Ranking Round took place on the morning of May 27 and it was Lee (KOR) who took the early lead in the competition after achieving the best round-robin score of 26V/9D.

Tymoshchenko (UKR) was only one win behind him and Dogue (GER) and Jun (KOR) made sure they gave up no significant advantage.

Cicinelli (ITA) gave himself some more time to play with during the Fencing Bonus Round. He won four bouts before being defeated by Ilya Palazkov (BLR), who enjoyed three successes before being stopped by Lee (KOR). 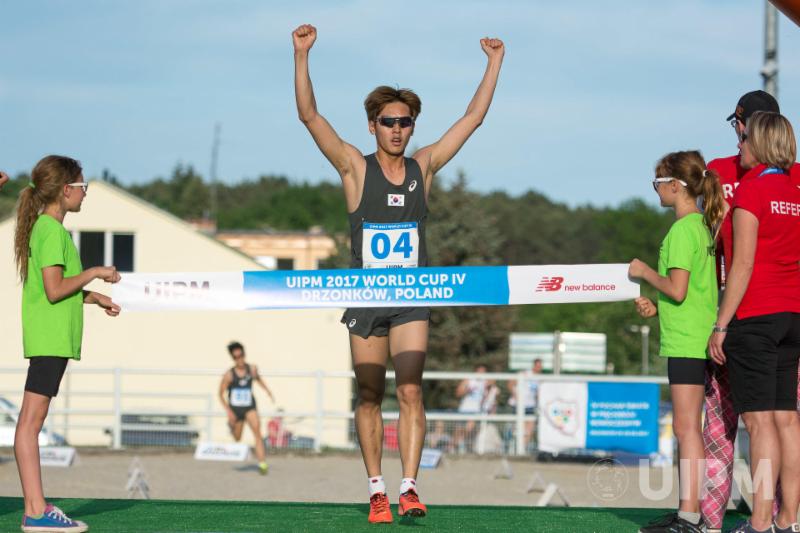 Six athletes managed a perfect Riding score of 300 and there was delight for the home crowd as Szymon Staskiewicz (POL) was among them, but none of the leaders featured in that group. But Palazkov (BLR) and Cicinelli (ITA) only conceded seven penalty points, allowing them to close on the Koreans.

Lee (KOR) started the Laser-Run with a slender lead over Palazkov (BLR) and the duo kept each other company for the majority of the race. In fact it was Palazkov (BLR) who seemed to have made a decisive break at the 3rd shooting range, but the final 800m lap left him sapped and he froze at the final shoot.

That was the moment when Jun (KOR) bolted for the front, and there was no prospect of one of pentathlon's fittest athletes surrendering gold in the last 800m, especially when his nearest rivals were clearly struggling.

UIPM President Dr Klaus Schormann said: "I would like to thank the organisers, the volunteers and the athletes for their performances over the last two days, and now we are looking forward to the Mixed Relay tomorrow.

"The Mixed Relay is very important for us and in five weeks the IOC Executive Board will decide if it will be included in the 2020 Olympic Games. All nations know how important it is to take part."

World Cup IV concludes tomorrow (May 29) with the Mixed Relay and the circuit reaches its final stop when the World Cup Final takes place in Vilnius (LTU) on June 23-25 - televised live on Eurosport.